The LANforge Scripting Cookbook provides a series of detailed examples of how to craft testing scripts for unattended and automated operation. Each example intends to give the reader a runnable test script and a better understanding of how to use the LANforge-CLI API.

Please read the summary information on this page before reading the chapters listed below. 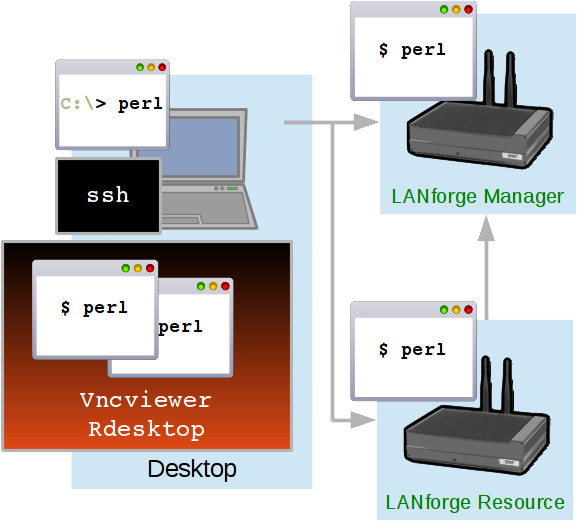 Your desktop (or other computer) running CLI scripts needs to have a reliable (wired) connection to the management port of your LANforge server. If you are engaging in long running tests, you might consider running the scripts from the LANforge manager itself if your desktop machine needs to be powered off.

Script Libraries
CLI scripts are written using Perl. They require the libraries in /home/lanforge/scripts/LANforge Users may write scripts in other programming languages, such as python, but in that case, they will not be able to take direct avantage of the Perl scripts included in LANforge.
On Windows
LANforge is more fully featured on Linux, but basic support exists on Windows as well.

You can run CLI scripts from any Windows desktop as long as you have Perl installed. You can use ActiveState Perl or Perl from the Cygwin project. We also highly suggest installing PuTTY ssh client to access your LANforge server.

On Linux/OS X
Most Linux distributions come with and ssh client and Perl already installed.
LANforge Server Requirements
The following examples will create test scenarios that work on LANforge Linux systems running the LANforge software with the LANforge kernel and a sufficient license. If you are running LANforge server using another Linux kernel, you may not be able to operate some of the examples. (Features like Armageddon, operation of WiFi-AC radios, and WanLinks all require drivers included only in Candela provided kernels.)

Please contact us at support@candelatech.com if you have any questions.

Before attempting the examples below, ensure that you have successfully followed these software installation guides:

If you have any questions or suggestions, email support@candelatech.com.

It is also recommended that you back up your current running LANforge Server database so that you may safely return to your current operating state.
For instance:

If you have any questions or suggestions, email support@candelatech.com.